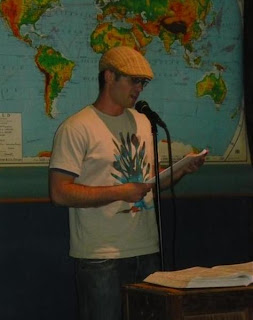 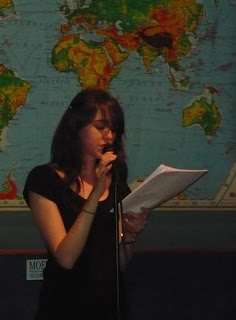 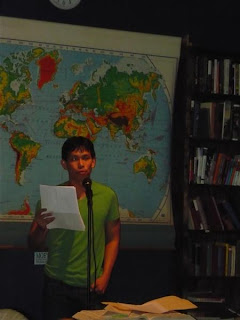 Posted by Colin Cheney No comments:

Please join us for the next evening of Chin Music, the Pacific Standard Poetry Reading Series. On April 30th, we are excited to feature three excellent poets: Jee Leong Koh, Rebecca Keith, and
Martin Rock.

Jee Leong Koh is the author of EQUAL TO THE EARTH and PAYDAY LOANS (both from Poets Wear Prada Press). His poetry has appeared in Best New Poets 2007, and Best Gay Poetry 2008, and has also been nominated for the Pushcart Prize. Born in Singapore, he now lives in New York City, and blogs at Song of a Reformed Headhunter (http://jeeleong.blogspot.com).

Rebecca Keith holds an MFA in poetry from Sarah Lawrence College. She has received honors from the Atlantic Monthly and BOMB Magazine and was a finalist for the 2008 Laurel Review/GreenTower Press Midwest Chapbook Series Award. Her work has appeared most recently in The Laurel Review and Storyscape Journal. She is a founder and curator of the Mixer reading series in New York City.

Martin Rock is an MFA candidate at New York University, where he is a Starworks fellow and soon to be Editor in Chief of Washington Square Review. His work has appeared or is forthcoming in NANO Fiction, 13th Warrior Review, At-Large, and Mississippi Review. After living for four years in Japan, he now resides in Brooklyn.
Posted by Colin Cheney No comments:

Then a blackout—we can’t see it yet—it’s daytime. But weren’t we amazed? Like a misguided dragonfly driving into the brick, Donna Masini’s poems auger and awl their way into us. Fiction & luster, I want them both, she tells us: his arm, his arm. Stupid, lusting, plunging—weren’t we imagining? What were we imagining? She could see herself layered with pages, the black print across her body—it’s touching really, what one stranger will do for another. This man in the snow (she saw him) peeling an orange, peeling the white shreds from the fruit like the organs under the plastic page in (she hadn’t seen this yet) Grey’s Anatomy, or The Beatles’ White Album, Joni Mitchell’s Blue, face half gone. Annunciations, inky diffusions—all year I’ve been watching myself flicker, unsure. And now the priest leans into the screen, your father moves the nativity to the coffee table. Donna Masini’s poems are a natural history of incarnation & grave, of being afraid of the small things, delphiniums, of thinking about sex. Not much lost—what I thought were birds was the Body of Christ I loved to hold in my mouth. The voice that makes him luster. Donna Masini.
Posted by Colin Cheney No comments:

James Hoch’s most recent collection of poems, MISCREANTS, was published by W.W. Norton and Co. His poems have appeared in Slate, Virginia Quarterly Review, New England Review, Ninth Letter, Pleiades, Black Warrior, Gettysburg, Five Fingers, and other magazines. His first book, A PARADE OF HANDS, won the Gerald Cable Book Award, and he was recently awarded a National Endowment for the Arts grant. Hoch teaches at Ramapo College and splits his time between New Jersey and Seattle, Washington.

Donna Masini is the author of two collections of poems—TURNING TO FICTION ( W.W. Norton and Co. 2004), and THAT KIND OF DANGER (Beacon Press, 1994), which was selected by Mona Van Duyn to win the Barnard Women Poet's Prize—and a novel, ABOUT YVONNE, (WW Norton and Co. 1998). Her poems have appeared in journals and anthologies including American Poetry Review, Open City, TriQuarterly, the Paris Review, KGB BAR Book of Poems, Parnassus, Boulevard, and Lyric. She is an Associate Professor of English at Hunter College where she teaches in the MFA Creative Writing program. She lives in New York City and is currently at work on a novel.

Rob Ostrom’s chapbook, TO SHOW THE LIVING, was published by the New York Center for Book Arts. His poems have appeared or are forthcoming in 42Opus, Glitterpony, Drunken Boat, The Helen Burns Poetry Anthology, and elsewhere. He is from Jamestown, NY and lives in
Brooklyn.
Posted by Colin Cheney No comments:

“So the thing I'm on now is to roust out somebody to jerk a little chin-music for us and waltz him through handsome.” --Mark Twain

Most every night of Chin Music features the voices of three living poets alongside the work of a dead one.

Located at in , near the Atlantic/Pacific
subway station, Pacific Standard is a literary bar serving up eighteen
microbrews on tap, focusing on West Coast beer as well as choice
selections from small and local breweries.